Welcome to my Tarot Blog 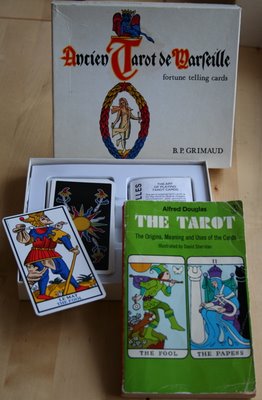 I was introduced to the Tarot by a boyfriend. He didn't last long but the cards have stayed with me. Thank you very much S for such a long lasting gift!

In those days it was hard to find tarot cards and we went on a trip to Soho in London to find them. There were only a few sets to choose from and I started with B.P. Grimaud's Ancien Tarot de Marseille. You can see how obliging they still are, when asking them for a card for starting this blog they produced The Fool!

Since then I've accumulated many different packs of divination cards, also runes and the I Ching - amongst them are many variations on the tarot.

I've often felt the need to draw my own tarot - not to sell but as a personal tool. I remember when I first got these cards I did draw various versions of The Fool but got no further. In this blog I'm hoping that some of those cards will start to take on form.

Recently I've been making a pen sketch of the card of the day pulled from The Shining Tribe Tarot.


Doing these has re-awoken a need to be creating my own images to work with.

I like the fact that the Shining Tribe's imagery is drawn from pre-historic artifacts, I love cave paintings in particular. But there was something missing for me. One of the most interesting things about many prehistoric artifacts is that they provide a clue to the postures that can be used to induce specific trance experiences. For more on this see:


I prefer the first of these books (the one on the left) but the other is also useful as it covers more poses researched since the first was written.

They are both based on the work of Dr. Felicitas D. Goodman who has been inspired by ancient artifacts to experiment with shamanic journeying in various positions based on those depicted. The use of the position often acts as a sort of key to a particular type of experience. The research has involved many people experimenting with specific positions and then comparing their journeys. A particular position does not guarantee a particular journey but it improves the chances of it.

The Tarot includes one important position that is not covered by these books - that of the Hanged Man (or Woman in the Shining Tribe). I'm currently exploring the relationship of the different energies of the major arcana with specific ecstatic trance positions and am considering echoing this in my major arcana.
Posted by Caroline at Thursday, December 21, 2006 8 comments: