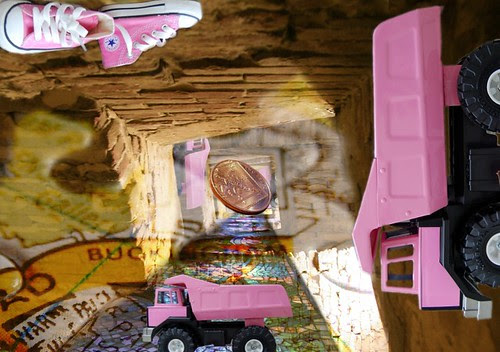 With thanks to: jurvetson for Step and Repeat; Telstar Logistics for Pink is the New Yellow; adamjinj for [365-22] A-Z & New ; ramson for Glass mosaic in the Kew Gardens Rhizotron entrance to the treetop walkway

I am One's for Labyrinth

I am One who reminds you that the direct route may not be the obvious one, nor necessarily the best.

In shadow, I am one who confuses you with all the twists and turns.

I am One who wants you to keep on trucking... Trust your intuition when your head spins.

The most interesting happening, in relation to this card, is that it drew some unasked for criticism from a flickr user, whom I've never met before and who calls himself an art critic.

What's more he used a very interesting phrase, he said I'd "over-egged the omelette". Now I'm aware of this as a phrase for overdoing things but in this context here are my thoughts about it, including as many other over-used clichés as I can think of:
And oh dear since looking up egg on the web I could go on and on... so many phrases that revolve around eggs! I've never enjoyed a criticism more! 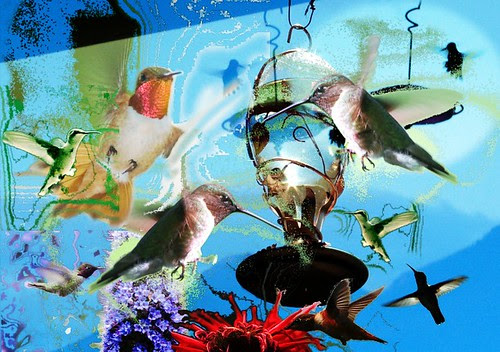 Thanks to: ArtBrom for Ruby-Throated Hummingbird, tilghmank for hummingbirds, ap. for hummerFlower2_060728, Aim and shoot! for humming, Thomas Hawk for I Needed More Time to Figure You Out , Yogi for Humming Bird (Attempt #2), PhotoFlunky for hummingbird

I made this collage inspired by Inspire Me Thursday's theme today of Hummingbirds. Also because Joy Eliz has recently posted some photos of hummingbirds that she took herself.